"Mr. Ruben's decision to take The Repeal Pledge shows voters that, when it comes to health care, he gets it – he understands that ObamaCare is a government infringement on our constitutional liberties, and he knows that it will lead to bigger government and less freedom, will place government bureaucrats between doctors and their patients, and will limit patients' choice and control," said Heather Higgins, President & CEO of Independent Women’s Voice. 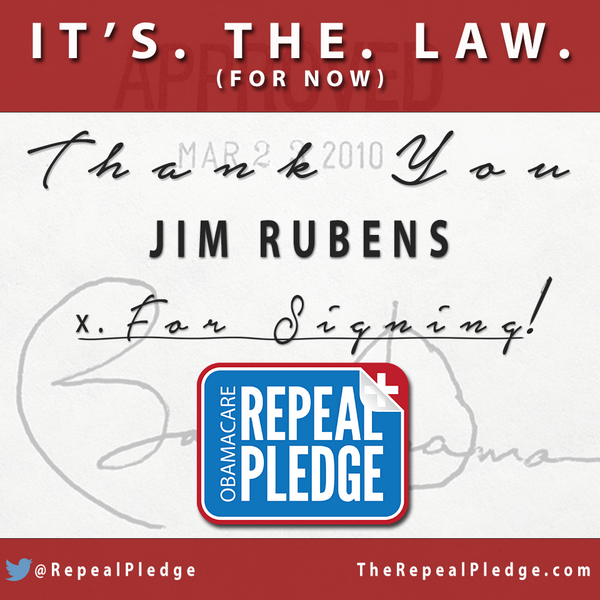 “While the President promised that if Americans liked their plan they could keep it, every day we see how ObamaCare is hurting Americans,” added Hadley Heath, health care policy analyst at Independent Women's Voice. “And it will only get worse.”

The Repeal Pledge advocates not just repeal, but defunding, deauthorizing, and dismantling the misleadingly-titled Patient Protection and Affordable Care Act, enacted in early 2010.  The Repeal Pledge was designed as a litmus test to help the American public understand which candidates and office holders are serious about repeal, versus those who claim to be but won't actually take action.

Signers of the Repeal Pledge believe that this law cannot be "fixed" and that stopping its implementation and ultimately repealing it are necessary first steps to ensure that citizens and their doctors, not government bureaucrats, have choice and control over their health care, and that medical care in our country becomes more affordable and available.

Mr. Rubens is the only candidate in New Hampshire's Senate primary to sign the pledge and we at IWV hope other candidates will soon follow suit to best serve the people of New Hampshire.

For more information on The Repeal Pledge, including a complete list of signers, please visit TheRepealPledge.com.  For interviews with Heather Higgins or others spokeswomen of Independent Women's Voice, please contact Victoria Coley at [email protected]