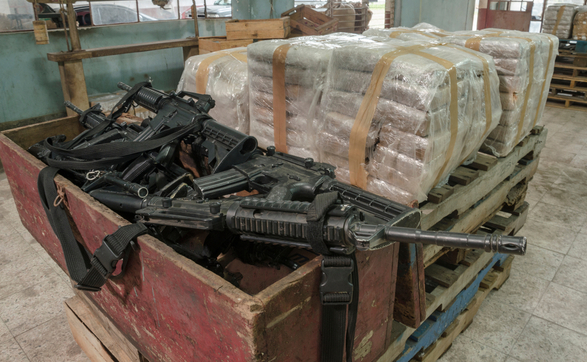 This is great news and a first step of many. The point stressed during the hearing was to urge the federal government to designate several of the Mexican drug cartels Foreign Terrorist Organizations. Currently, the drug cartels are classified as transnational criminal organizations. The bill must now seek passage of the full Ohio House legislature.

Democrats and Republicans can work together, as shown in Ohio, to take a stand against these narco-terrorists and tackle this crisis with full force. It is the reason the foundation I established last year The Dark Wire: An Investigation Foundation produced the non-profit documentary Not In Vein. Instead of talking about the problems we should be proposing solutions. After all, it is our country and ‘we the people’ are in charge.

Designating the drug cartels Foreign Terrorist Organizations, instead of transnational criminal organizations, is the best way to seize hundreds of billions of dollars from the cartels bank accounts, hold the cartel leadership responsible, unleash the full force of our Defense Department programs, along with other federal law enforcement resources, to assist our counterparts in Mexico to fight the narco-traffickers. It will give the tools necessary to establish real tactical operations and for once take control of the crisis instead of talking about it.

Extensive law enforcement, military training, financial and IT investigators will crush the narco-terrorists operations and root out those on their payrolls in an effort to dismantle them.

Organizations such as the Sinaloa Cartel, Jalisco Nuevo Generacion Cartel, Beltran Levva Cartel, Los Zetas and others have blackmailed, strong-armed, brutalized, killed and recruited both people in Mexico and the United States to continue their operations. We will find out who they are and one by one, take them down. It won’t be a dog and pony show with a drug cartel leader going to jail, like Joaquin ‘El Chapo’ Guzman after nearly three decades of operating and then replacing him with another narco leader. It will allow us to use all the tools in America’s toolbox to dismantle the organization from the top down.

Derek Maltz, the former head of the DEA’s Special Operations Division, who testified, alongside Heidi Riggs, who daughter Marin died shortly after her 20th birthday of a heroin overdose and I, noted during the June hearing that deaths in Mexico are at “record level for the country, and we have seen serious violence in America as well.”

“Based on the unprecedented violence, deaths to Americans and criminal activities, a sound case can be made to designate the Mexican cartels as foreign terrorist organizations pursuant to the U.S Department of State criteria,” he testified. “The Mexican cartels have left a trail of blood using intimidation and terrorist acts of ruthless violence. The cartels engage in beheadings, car bombings, dissolving humans in acid, mass murders, torture, bombings and political assassinations. Their actions are consistent with the behaviors of traditional terrorists and they have infiltrated the highest levels of the Mexican government with bribes and corruption. Despite these trends, people refer to the Mexican cartels as only transnational organized criminals even though they operate like terrorists and wreak havoc all over their country, United States and Canada.”

It won’t be easy. The narco-traffickers will fight back. These organizations have been allowed to amass hundreds of billions of dollars off of the death of Americans and people around the world.

The drug cartels leave death and destruction in their path. Think about this, there were over 29,000 murders in Mexico in 2017 and over 33,000 in 2018. And those are just the numbers we know due to faulty statistics on missing persons and deaths in Mexico.

Moreover, in the United States the deadly chemical Fentanyl and Heroin, which roughly 95 percent is transported through our southern border, is killing more than 130 people per day.

The cartels have franchised out to selling arms, human trafficking, child pornography and yes, in some cases have allowed their transit routes into the U.S. and money laundering operations to be accessed by terrorist organizations. Why? Because the drug cartels are terrorists.

Maltz said it best during his testimony, “for the United States to properly deal with one of America’s greatest national security threats, it’s time to stop debating and procrastinating, and designate the violent cartels as terrorists. In this country we need to put the politics aside and look at the volume of deaths alone. For the members of this General Assembly of Ohio, look at all the citizens from Ohio who have died from this crisis and the destruction of so many great American families.”